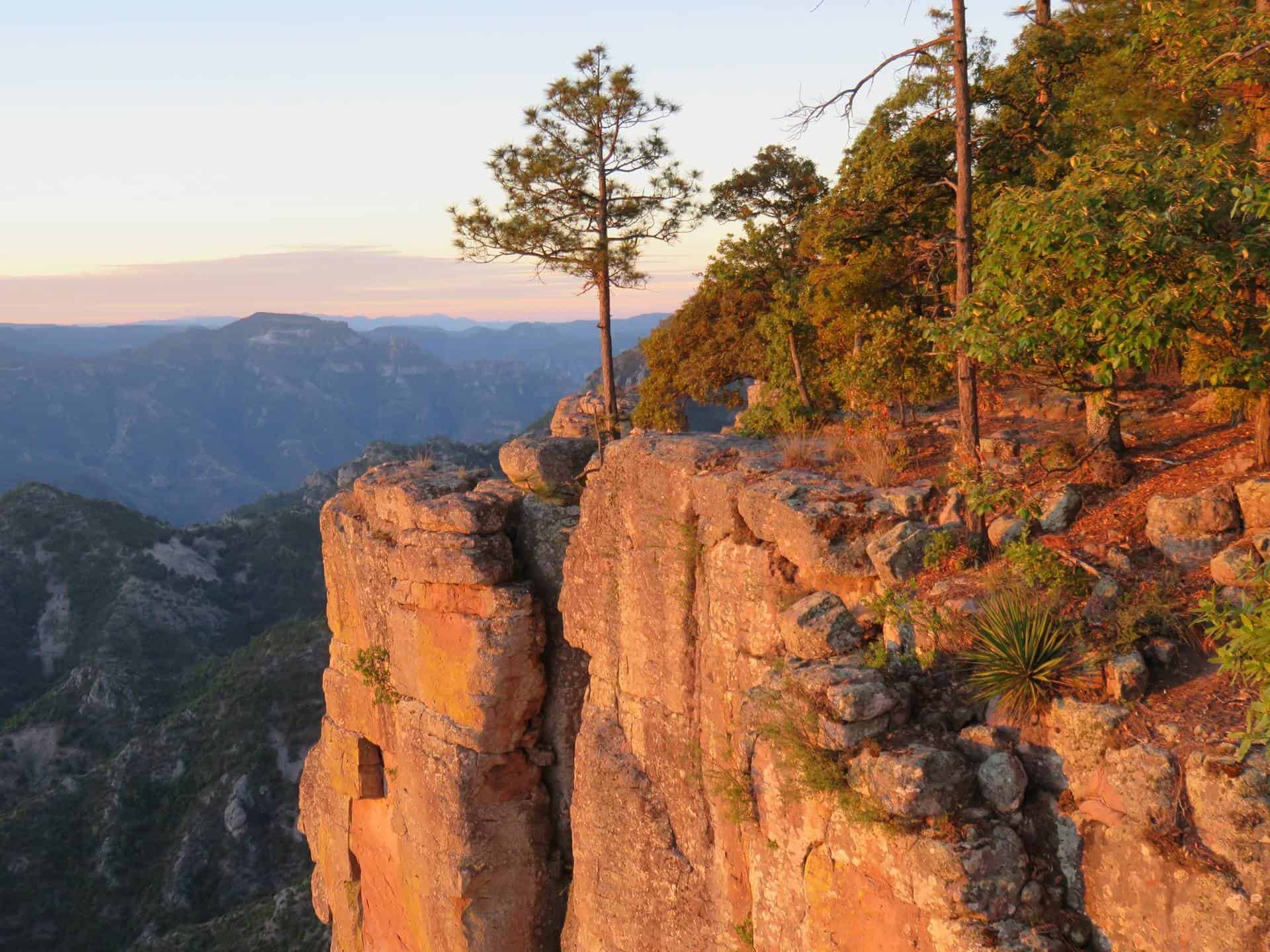 Copper Canyon has always been a trip I wanted to do in Mexico.

I am fortunate enough to have travelled quite a bit in this wonderful country, but by far haven’t seen all the “must-see-sights”, that according to some include Oaxaca and Guanajuato, Puerto Escondido and San Cristobal.

But to me, mountains and nature have a certain attractivity, and I am very happy to have had the chance of finally taking this trip on the Copper Canyon train, and showing my man a different Mexico, one a bit off the beaten track.

Tips for a Copper Canyon trip

Who should take the Copper Canyon train?

One might say, good that it wasn’t crowded, but as a tourism professional myself, I am sad that tourism to this amazingly beautiful part of the country declined so much….

We did not once ever feel nervous, or sense any danger, at any time of the trip.

The route we took touched larger cities like Los Mochis only briefly, and didn’t go through Chihuahua at all. Don’t be afraid of the red travel alert that’s showing up on TripAdvisor when you look up some of the places we stayed. All opinions I can give will be biased, as I lived in this country and love it.

Please do keep the following in mind (sorry if it is repetitive) – drug related crime is not targeting tourists – think realistic – why would drug lords be on the train??

There’s federal police on the train, too, so unless they are really stupid, they keep away – most of the crime is around the boarder areas (and on both sides of the boarder!!), and the Copper Canyon Mexico is still a couple of hours away from the boarder…

The Canyon, to be precise it’s a system of 6 canyons, is in the states of Sinaloa & Chihuahua in Northern Mexico, also referred to as Sierra Tarahumara. The indigenous tribe of the Tarahumara, or rarámuri as they call themselves, is said to be “the running people”.

This might ring a bell for those of you who heard or even read the book “Born to Run” – actually, Dominik had just started reading it so the trip definitely had an additional interest to him – that eventually might go as far as considering running the Copper Canyon Ultramarathon…. we shall see. Anyway – here we go, off to the airport.

Honestly, trying to get to Los Mochis from Puerto Vallarta is a bit of an ordeal, unless you fly through Mexico City for obviously more $$. We chose to take “the little one”, Aereocalafia, to Mazatlán.

On the pics you see our take off and views of Nuevo Vallarta, and how the river water from the mountains, rich in sediments, draws a clear line to the blue ocean water. Eventually, rainy season will come to an end.

After a nice taco lunch we continued by bus to Los Mochis, about a 6-7 hour drive. As the train leaves Los Mochis at 6am we decided to just stay conveniently and low budget at Best Western, about 5min from the bus station and 15min from the train station.

It is recommended to be at the Copper Canyon train station at least 30 minutes ahead, with a 6am departure this gave us a wake up call at 4.45am… thank god we had the strategic advantage of still being on central time of PVR with our minds and bodies, so the 4.45am mountain time although still hard weren’t brutal…

But here’s a bit more information on the Chepe, the only real remaining passenger train of Mexico (or so I was told). The train began operation in 1961 and building the tracks from sea level to altitudes of more than 2400m was a truly magnificent achievement of engineering. It runs over more than 650km from Los Mochis to Chihuahua, and needs about 15 hours for this – do the math on the average speed!

The most interesting part starts about 1 1/2 hours after passing El Fuerte, when the train starts to get into the mountains and passes on the way to the highest point about 86 tunnels and 37 bridges…. Some more info, although unfortunately only in spanish, is here. Around the station of Temoris, already more than 1000m of altitude, it winds up over 3 levels, quite impressive to travel….also, at a place called El Lazo (we passed it on the way down) the train makes a full circle and crosses its own tracks 30m further down.

Our journey ended for today at Posada Barrancas, a little village of 500 people and probably 5 posadas… We stayed at Hotel Mirador, with amazing views over the canyon. We got to there just on time to grab a bite to eat for lunch and then off with Gustavo, our guide for today.

Unfortunately, both cable car and ziplines were already closed for the day, so we just took some (admittedly) poser pictures on the balancing rock and hiked around the rim. Back on time at the Mirador for happy hour, hummingbird watching and an early dinner.

Waking up in a nice climate for a change!! That was something Dominik definitely preferred over the humidity and heat of PV – I admit it, a nice one for me too.

Our guide picked us up at the Hotel Mirador and we drove over to Creel, about 45km, that we needed maybe 45 minutes, while the train would need more than an hour. Climbing was the plan of the day.

To test our skills, our guide first took us to Creel’s backyard, a rock at the edge of the town, with set routes. I was quite nervous, I was about to climb and most probably would fall… totally out of climbing shape, last time I was in an harness (not counting in ziplines), was 12 years ago, before my little badminton accident. This being said…. no better reason to go than with Dominik…. in the end, this could be a hobby we’d both pursue.

After a little bit of refreshing the knots and technique… there I was…. up and up. Not doing too bad I’d say at that rock. And certainly, for Dominik, it was quite an easy walk in the park.

As Arturo, our guide, got some confidence that we’re not for the first time at the rock, he took us to the Valley of the Monks. An amazing place, close to Creel, habitate of Tarahumara indians. Those live quite spread out, being runners and walkers, children do distances of easily 45 min to school. A big incentive for the families to send them to school is the fact they get food for free there. The Tarahumara don’t actually have a village, they live all over, and just gather at the community center for social purposes.

The valley apparently is result of hundreds of thousands of year of corrosion. Those rocks were harder than the material between them, so they kept up while the rest was slowly but surely washed away. And yes, it’s called monks, although those needles and towers might provoke your phantasy.

There the routes were top rope secured, Arturo went up from behind, put the rope in and we climbed. First one was challenging for me, but the best experience was, I didn’t fall once, I did way better than I thought and was just happy that my ankle didn’t hurt at all.

Second one, easy up to the upper third, then Dominik did fight quite hard to make it. Congrats babe, it was a very tough one… on our scale in the upper part most probably a 6+. Well, I tried, did better than expected, but just not good enough to make it all the way up. However….veeeeeery happy and looking forward to Tessin, Dolomiten, and all the rest of the Alps back home.

Once fingers and arms were numb, Arturo took us to the Sierra Lodge, not too far from Creel, where we were supposed to spend the night. The lodge is literally walking distance to the Casare waterfalls. The landlord, the mexican ranchero in person, showed us the room – very cosy, very lodgy, no electricity. Petroleum lamps in the bath and bedroom….better don’t turn them off!

As we’d been so long on the train the past few days, we decided to go for a little walk to a cave close by… I guess I am most impressed of the conditions those Indians live in… harvest was bad to non existent, they don’t have much cattle, no beans, no corn…. still, happy in their lives.

A delicious dinner was served by two Tarahumara women working at the lodge – we were the ONLY guest…. and went to bed early as we wanted to check out the waterfalls the next day before we had to leave for the train…..

Before breakfast hike to the Waterfalls is definitely worth it!

Last stop of the Copper Canyon was El Fuerte, which we reached after a couple of hours train ride back down from Creel.

It is believed to be the Zorro’s town, and I like the thought that we actually slept at his mansion, the Posada de Hidalgo hotel. It is a block from the main square and right next to the old fort, “el fuerte”, in Spanish, which actually also means, the strong one.

The hotel is actually a couple of formerly seperate residences, with many little patios and a nice roof top terrace. From the restaurant and pool one also has a nice view of the sunset and the city.

For even better views we visited the fortress, it has a small museum of the development of the town and some old tools and weapons.

The trip is coming to an end…..

We took the bus back to Los Mochis, which is a couple of hours, and from there a plane to Guadalajara, in the state of Jalico, the state of Tequila. We had the very pleasure to inaugurate as a test guests the newly built Westin Guadalajara, right across the street of the World Trade Center. Truly heavenly beds, and even more so after long hours on buses, trains and planes.

Our last day of the trip we enjoyed a city tour on the famous red Turibus, with a long stop in Tlaquepaque for shopping, before having dinner at an argentine restaurant, and hopping on the night bus back to PV.

—> Book your excursions. Wherever you go, try to make the most of the time that you have! Excursions with interesting and professional guides will help you with this – you can choose a location and the best option for yourself on Viator or Getyourguide.

—> Find out in advance and book flights to Trip.com.

Why you Should Discover and Visit Mazatlán, Mexico

Canada Working Holiday: How to do it and What to Expect