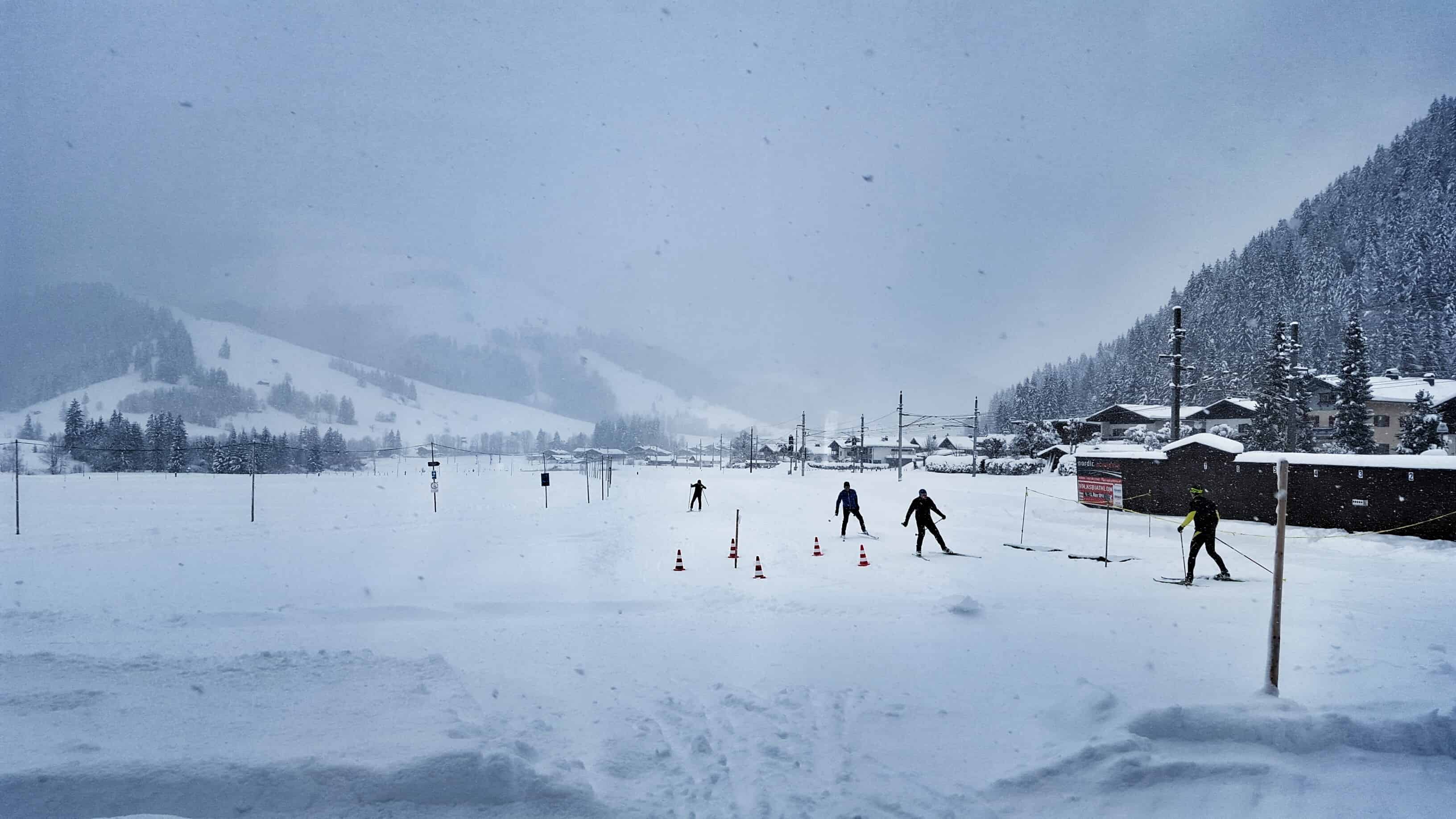 It’s wintertime and if you turn on the TV on a weekend, you will sooner or later find live coverage of Biathlon. That’s at least the case when you live in Europe.

I’ve never watched it too long, though I realized how difficult it must be to “skate” lots of kilometers, then calm down and hit the targets 50 meters away.

I’ve done some cross­country skiing before and now I was in Austria and had the opportunity to give it a try to pair the cross­country with shooting. I was never in the army (luckily) and I was quite sure that I would be a bad shooter. As a kid I was raised on the countryside and we had an air gun at home, where we shot a couple of times on a target. I’ve never done it often, as it just got too boring after a couple of shots.

I love to try out new things!

The shop Nordic Academy in Hochfilzen rents out all kind of different cross country ski equipment. So you can hire cross­country ski, where the heel of the foot raises while skiing. Then they have cross­country skates, where the whole shoe is fixed and you “skate” to get forward (similar like ice skating, at least from the movement) and they even rent out Off­track cross­country skies, which are a bid wider and got a steel edge.

For the biathlon we used the simple cross­country ski and we got an air gun. The targets were only 10 meters away, so that we at least had a bit of a success and chance of hitting them.

In biathlon you have two different ways to shoot, lying on the ground and while standing. Obviously lying on the ground is far easier and that’s what we started with, so that we later knew what we had to do. It’s quite easy. You lie down, look through the sight pipe and when the needle is in the middle and the target behind it, you use the trigger and hit it.

OK, it’s not that easy, as you move quite a bit. But you can rest the gun on your arm and that should keep the movement to a minimum. It looks different when standing, as there is no way that you can hold your arm and gun still. First round lying I hit 4 out of 5 and standing I hit 2 out of 5. I wasn’t really happy with the results in standing, but also had no clue of how I could improve this result.

I got told that even the professionals are not able to completely stand still and that the gun/arm would move. They are just trained to move far less and then use the trigger smoother and quicker when the target moves into finder.

Funny is, that each time firing, I was sure that I hit the target, but somehow moved in the last millisecond and missed it. Each hit gives that “kling” and if you don’t hear that, you wonder what happened.

We had two groups with each 3 runners. Each one would ski down a 30 meter long track, turn around and then shoot the targets while lying on the ground. Here it helps if you have done some cross­country skiing before, as you ski quite quick without using too much energy. But I knew that my condition was bad, actually not existing. So on the way back I took the last few meters slower and breathed in and out deeply to get a calm and steady heart beat.

Then you lie down, take a few very long breaths of air and start aiming for the target.

You do this 5 times and for every missed target you have to run a small penalty round. So it’s smarter to concentrate and take a bit longer at the shooting… if you hit the target then. If you are a good skier, you might also be able to catch up and be quicker by just taking the penalty round.

I was happy with my results, as I hit all 5 targets, but after the competition I wanted to see if I could improve as well my results while standing. Even there I was now able to hit all 5, though I think I was lucky as well.

I doubt I would even get close to the target on the normal distance of 50 meters.

A lot of respect for the professionals!

Biathlon is a very tough sport and I’m sure that I will watch it on TV next time when finding it while zipping through the programs… at least a bit longer than in the past.

A Guide to Hiking in Sintra, Portugal

Best Things to Do on Texel, Netherlands (Including Where to Stay...