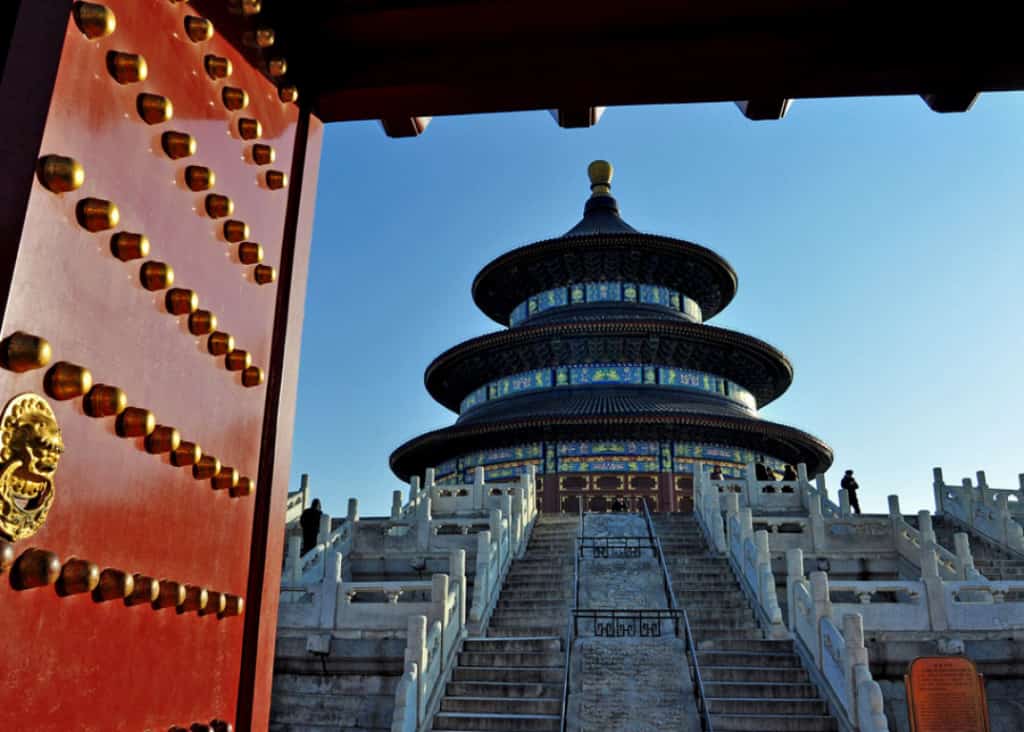 Welcome to China’s Temple of Heaven!

This fascinating destination is one of China’s most popular tourist destinations. Before you visit, it helps to know these interesting facts about Temple of Heaven.

Interesting facts about Temple of Heaven

1. Many books, magazines, and travel websites prefer to use the photos of the triple-gabled circular temple in the Temple of Heaven to represent Beijing. It has become one of Beijing’s truly prized landmarks.

4. The main structures in the Temple of Heaven lie along the south-north axis as with all temples in China.

5. The most striking building in the Temple of Heaven is the tall, circular Hall of Prayer for Good Harvests. Its location was determined by the emperor’s Fengshui masters as the exact point where heaven and Earth met.

6. Seen from above, all the temple halls round and the base square, shapes also respectively symbolizing the heaven and earth. The wooden pillars support the ceiling without any nails or cement.

7. In the south of the park lies the Imperial Vault of Heaven. It’s a round hall tiled in blue and standing on a white platform. Just north of the altar is the Echo Wall. Here, a whisper can travel clearly from one end to your friend’s ear at the other.

However, the Echo Wall will not work if there’s a bellowing tour group in the middle. Make sure to get here early if you want to experience it properly.

8. The Circular Altar to the south was for astronomical use in ancient China. It also served as the sacred place to hold the annual winter solstice ceremony. The mound consists of 3 tiers that represent Earth, the mortal world and heaven.

The upper tier in the Circular Altar is adorned with 9 stone rings. the number 9 has special significance in Chinese cosmology, for there are 9 layers to heaven.

9. The temple park is generally accessed via its west gate. However, there are 4 gates at each side of the place. The traditional ceremonial route approached the altar through the south gate.

10. The Temple of Heaven used to served as the sacred place where emperors of the Ming Dynasty (1368 – 1644) and Qing Dynasty (1644 – 1911) held the Heaven Worship Ceremony. First built in 1420, it is China’s largest and most representative existing masterpiece among China’s ancient sacrificial buildings.

Together with the Great Wall, Forbidden City and Summer Palace, The Temple of Heaven is the must see in Beijing. It offers you a great chance to learn about the Chinese ancient philosophy, history and religion.

We hope you enjoyed these interesting facts about Temple of Heaven!

A Guide to Teaching English Abroad