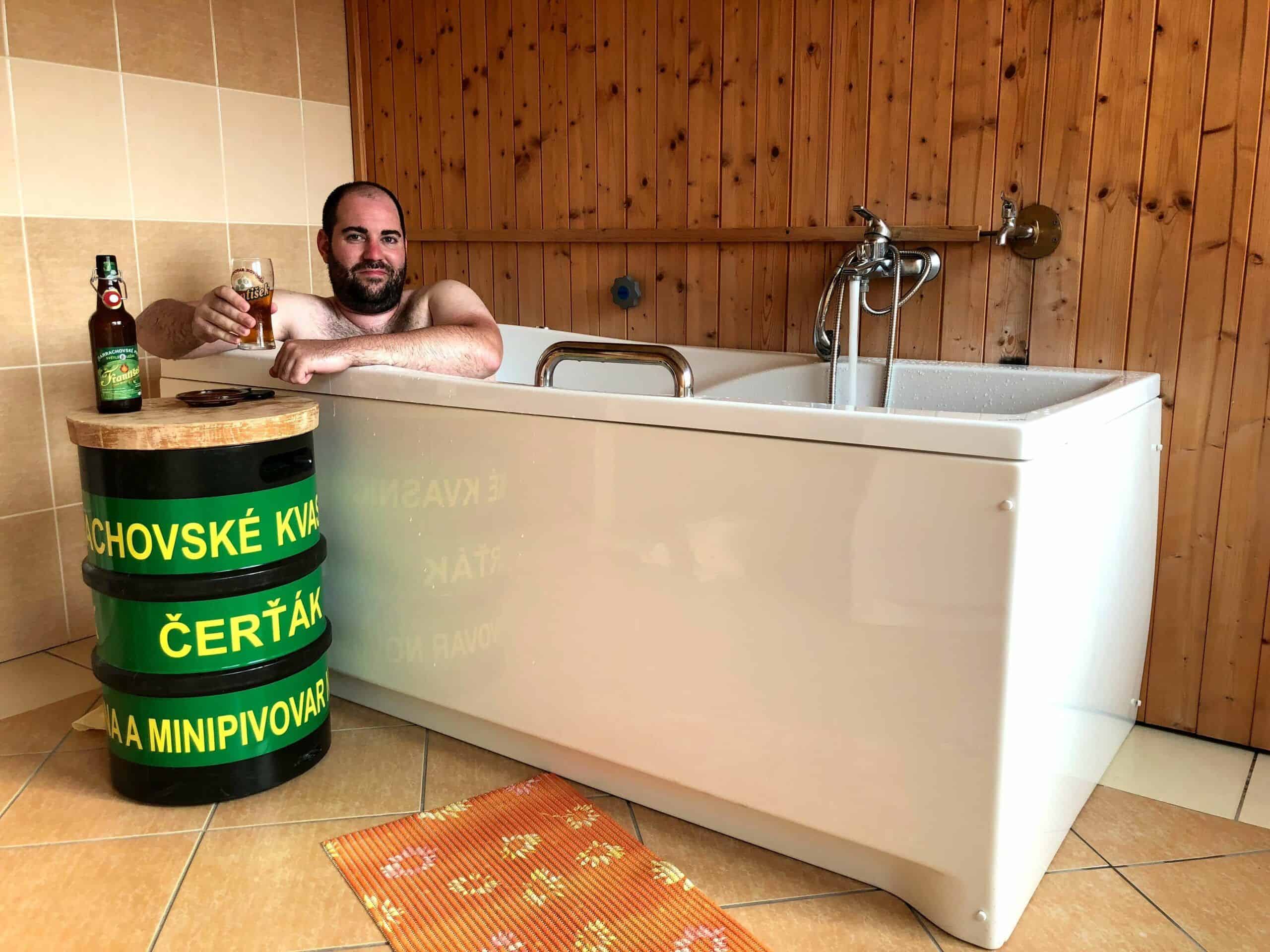 If you happen to be travelling to the Czech Republic, you have to try the beer spa experience.

Did you say beer and Spa in the same sentence you ask? Surely you mean enjoying a relaxing beer whilst at a spa?

After all, this is the Czech Republic we’re talking about here.

In the Czech Republic, it’s possible to enjoy a relaxing bath in a tub full of beer.

I kid you not; this is not an urban myth, if you visit the Czech Republic you can also enjoy this rather oddly relaxing experience of bathing in a whole tub of beer.

After all the Czechs have plenty of beer to go around with a whopping 400 breweries on offer across the country.

I’ve often seen beer cheaper than popular soft drinks in supermarkets, making it a refreshing beverage of choice to enjoy amongst the locals.

The Czech Republic holds the title of being the most prominent beer-drinking nation in the world drinking a massive 191.8 litres per capita per year in 2018. That’s a whopping 2,033 million litres total.

After all, the Czech Republic is the birthplace of many styles of beer such as Budweiser and Pilsner and is home to countless breweries throughout the country.

One thing is for sure, the Czechs know how to craft an incredible beer and the Czech Republic, in my opinion, serves the best beer in Europe for the price.

Being a big fan of beer, I’ve been on many beer trips to the Czech Republic. I love to enjoy the incredible craft of Czech Beer and the beer tourism scene.

So, when it comes to enjoying a beer spa, simply put, where do I sign up?

If any nation on the planet were serious about bathing in beer, it would be the Czechs for sure.

The whole process of a beer spa is rather bizarre from start to finish.

You can book yourself a Beer Spa Experience pretty much across all of the Czech Republic; it’s a popular experience amongst locals and visitors to the country.

However, the price will differ depending on where you go. I’ve seen prices in Prague for around the €120 for two people sharing and around €30 for one person where I was, in the Liberec region.

For my beer spa experience, I went to the region of Liberec, surrounded by the Jizera Mountains, commonly called and nicknamed the Manchester of Bohemia.

Here you can find the town of Harrachov which has a local brewery offering a beer spa experience.

Sadly the beer itself in the tub isn’t drinkable, but I’m not sure you would want to drink a tub full of beer that you’ve been bathing in any way.

It’s more the mash and ingredients that you would find in a beer.

So yes, you can make beer with it, but it’s not as if you’re bathing in sticky carbonated liquid.

It’s all the healthy ingredients that make beer to form some soothing bath mixture that’s good for your health.

Of course, every beer spa experience wouldn’t be complete without an actual glass of refreshing beer to complete the ambience.

Most packages will include a glass or two of beer and some even provide a beer tap next to your tub, so you can drink away to your heart’s content.

I found the whole experience rather relaxing and enjoyed the entire concept a lot.

It was like chilling in a hot tub full of beer, and I could feel the positive benefits of the beer ingredients working its magic on my skin, I can see the effect it can have on your health.

However, I did smell of beer for the rest of the remaining day and did get a few funny looks.

It’s something unique to try and enjoy in the Czech Republic and would highly recommend it if you have an opportunity.

I’m looking forward to hopefully visiting the Czech Republic next year again and enjoy a refreshing Czech beer in a relaxing beer spa on my next trip.

What to See in Cagliari, Sardinia

The Best Events Taking Place in Barcelona in October

Things to Do Before Hitting the Ski-Slopes