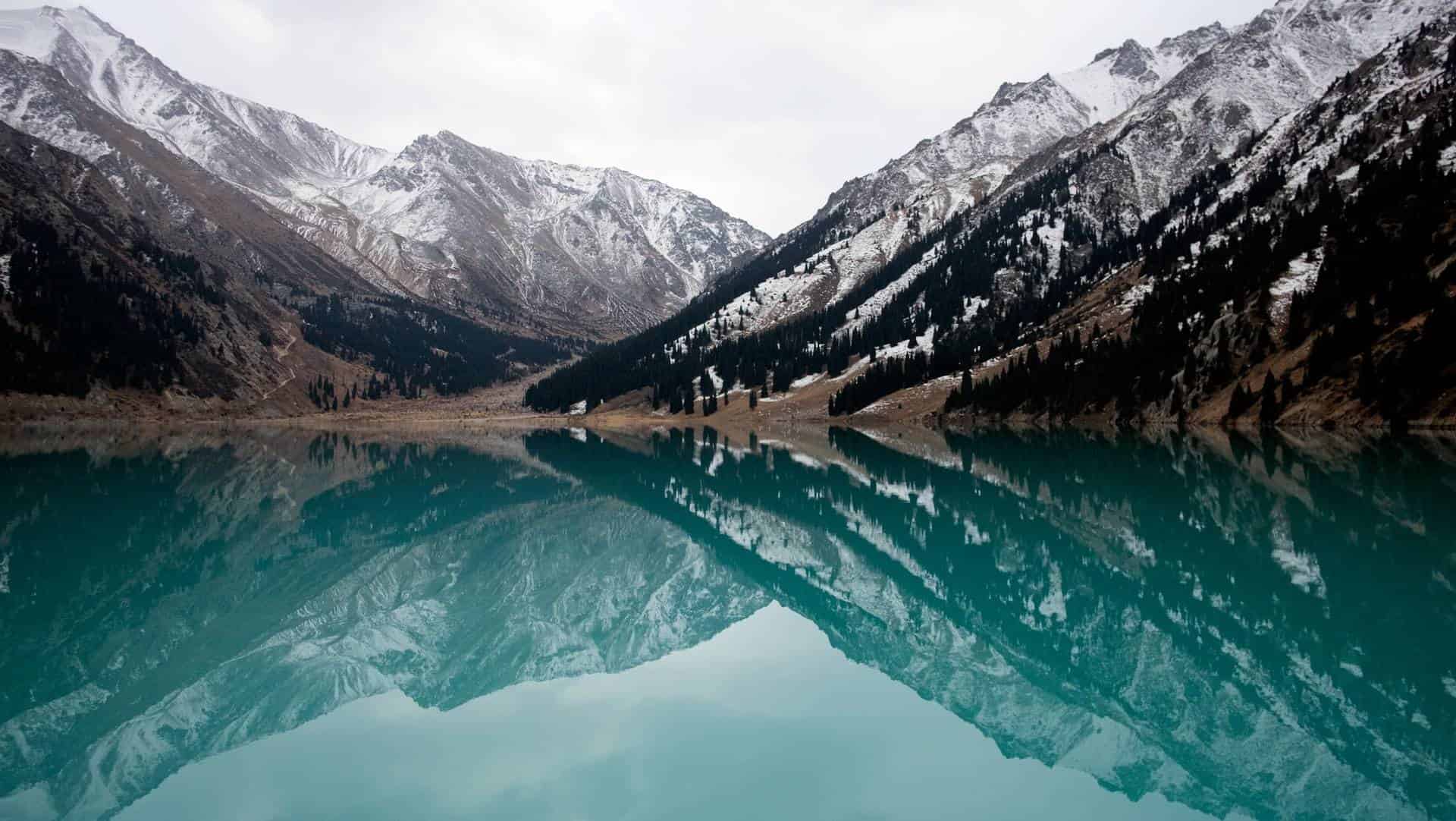 Until twenty years ago Kazakhstan was one of the great unknowns, a relatively undiscovered region of the former USSR. But today, many travelers are excited to visit Kazakhstan.

Located along the ancient Silk Road, this land of vast plains, beautiful mountains, clear lakes and clean rivers was considered basic, unwelcoming and remote to all but a few of the hardiest adventure travelers.

Today, Kazakhstan is an ethnically diverse republic with a unique culture mix on the border between Europe and Asia.

It is prosperous, modern, and chic in places, unspoiled, cultural, and quiet in others. It borders the Caspian Sea, the only inland sea in the world and is famous for its caviar; it is also the nation which gave the world tulips, apples and domesticated horses.

In the past Kazakhstan was broadly divided in two – the area of the settled Silk Road in the south, and communities of nomadic horseback herders who covered the rest of the country.

This situation continued until the early 20th century when the Kazakh people, under Soviet rule, suffered serious hardships.

An estimated 1.5-2 million died of hunger, some people fled to China, whilst others, mainly intellectuals, were repressed by the regime; this is undoubtedly where the image of an unwelcoming and cold land originated. However, in December 1991 Kazakhstan was proclaimed an independent state, and circumstances started to change.

Places to visit in Kazakhstan – Its Towns, Cities & Countryside

As large as Western Europe and four times the size of Texas, Kazakhstan is totally diverse. North, south east and west, there are opportunities to enjoy everything from five star hotels to traditional Kazakh tent homes – yurts, where guests can learn about local customs, lifestyle and traditions.

There are mountain trekking and wildlife reserves, extreme touring adventures and chances to try out the ancient tradition of hunting with birds of prey. There are also opportunities for those interested in history and culture.

Kazakhstan is eager to attract foreign visitors, so those that take time to visit, are treated with enormous respect and genuine hospitality.

Visit the south of Kazakhstan

The south is rich with ancient history and culture. It is renowned for its medieval architecture, mausoleums and ancient burial mounds, it also the location of Kazakhstan’s equivalent of Cape Canavera — the Baikonur Cosmodrome.

The site is located in a semi arid and unpopulated area with links by road and rail. It is advisable to arrange visits through a specialist tour company such as Country of Tourism Ltd or Kendala Adventures, as permits are in high demand, especially leading up to launches.

Places of the Silk Route in Kazakhstan

The most highly populated region of Kazakhstan, Shymkent, is the third most populated city in the country. The city was founded during the 12th century as protection for the town of Sayram, an important stop on the Silk Route 10km to the east, but the town soon grew to become a central market town for trade between the settled people and the nomads.

Two other fine examples of an important towns on the Silk Route are Turkestan (Yassay) and Taraz.

Taraz is more than 2,000 years old and known as the city of merchants. It has ancient archeological monuments such as the fretwork covered 12th century mausoleum of Aishai-Bibi, a UNESCO protected monument, and the unique 16 rib umbrella dome of the 11th century Babadja-Khatun mausoleum, the only one of its kind in Central Asia. Finally is the city of Turkestan, 1500 years old, and the final resting place of the Muslim poet and humanitarian, Hodzha Ahmed Yassavi.

Western Kazakhstan is the crossroads between Europe and Asia. The Caspian Sea, the Volga, and the Ural Rivers make it a prime area for hunting, angling, and water sports. Here, it is also possible to witness the second lowest land level on the earth, the Karaghiye Depression; 132 meters below sea level. There are clear springs, beach resorts and canyons where extreme travelers will appreciate rock climbing on striking cliffs.

It is not just southern Kazakhstan that was influential in the Silk Route, the west and the Caspian Sea were also hugely significant. Small settlements – Caravanserais, survived here at Sartash, Ketyk, and Alta. There is also the legendary sacred mountain of Sherkala, where ruins of a fortress belonging to Jochi, eldest son of Genghis Khan, can still be seen.

As well as a thriving beach resort, the area around Aktau is the home to galleries of rock carvings attributed to nomads dating back between the 10th and 2nd centuries BC, and an underground necropolis created by Beket-Ata, the Muslim prophet to whom all creation was open.

Ustyurt National Biosphere Reserve is a land of desert landscapes, lowlands, plateaus and a haven for rare animals. Ustyurt moufflon, cheetah, jackal, fox, saiga, gazelle, and long spined hedgehog are all found here. As well as the reserve, Ustyurt also features the ruins of ancient settlements and cemeteries on the banks of the Dead Kultuk, which are thought to belong to nomadic tribes from the 4th century BC.

Northern Kazakhstan is another region which provides excellent outdoor opportunities such as cycling, boating, and off-roading, as well nature reserves and health resorts.

One of the most popular resorts for both locals and visitors is Borovoye. Known as the Switzerland of Kazakhstan, and just like its namesake, it has a rich variety of restaurants, bars, shops and nightlife. It is a natural oasis with lakes, and unspoiled green forests, camping sites and spa resorts on the lakeside. Visitors looking for a remote experience can cross the small mountainous isthmus to reach Big Chebach Lake, which is a perfect, unhurried wild experience.

The capital of Kazakhstan, Astana, is a cosmopolitan and architectural city. Set on the banks of the Ishim River, the city has everything from opera and ballet to modern architecture such as the Baiterek Tower, the symbol of the city. At the top of the 97 meter tower there is an observation deck with a bird’s eye view for miles around. There is also a restaurant, art gallery, and a large aquarium lower down.

Central Kazakhstan is a huge and relatively undiscovered region of the country, and location of the unique Blakhash Lake; one of the largest lakes in the world.

Balkhash Lake is the largest undrained reservoir after the Aral and Caspian seas. It is unique because of the different mineral composition of its water in the eastern and western parts, and it’s also a phenomenon because of its fish. There are an incredible amount of fish in the lake; trout, marinka fish, carp, white amur, barb fish, bream, barbel fish, catfish and many others. Every year between 8 and 10 thousand tons of fish are caught here.

The central region is also home to Bektauata Mountain Massif which comprises of bizarrely shaped rocks. In clear weather the massif can be seen for hundreds of kilometers, giving it the nickname ‘the lighthouse of Balkhash’. Daylight penetrates deep into its caves, where cavers explore grottoes and crystal cellars. Over thousands of years the pounding elements have eroded the granite to create fantastic rock formations with names like the Mushroom, the Chest, and the Turtle.

Eastern Kazakhstan is distinguished by the Altai and its wooded foothills, the Irtysh River and lakes; this is the border with China, Mongolia and Russia. The mountain ranges of Rudnyi, Southern Altai, Kalby, and Saur-Tarbagatai play a considerable part of the region’s landscape.

Snow capped Belukha Mountain is the highest mountain in Altai and Siberia. It is the kingdom of ice and snow, with incredible thundering avalanches and clear, sparkling waterfalls. Berkutaul, meaning home of an eagle, is the neighboring mountain and another of the of the Southern Altai’s popular peaks. At 3,373 meters, this area is also home to the endangered Snow Leopard, some of the most illusive animals on the planet.

Markakol Reserve is another land of animals. Siberian stags, ermine, brown bears, elk, foxes, lynx, sable, the rare red wolf and birds such as falcon, grouse, black stork, and herring gull can all be found in the woods. There are attractive rocky mountains covered with greenwoods, fir forests, and sub alpine meadows, rich in flowers and rare medicinal plants.

Kiin-Kerish, which literally translated means proud beauty is a natural city made from tertiary clay; an incredibly beautiful and unique place with distinctive orange, white and red structures. The main feature of Kiin-Kerish is small layers of sand and clay with imprints of plants from its ancient tropical past and the fossils of rhino, crocodile, turtle and salamanders.

The Indian Railway Made Simple

Important Reasons Why You Should Use a VPN While Traveling