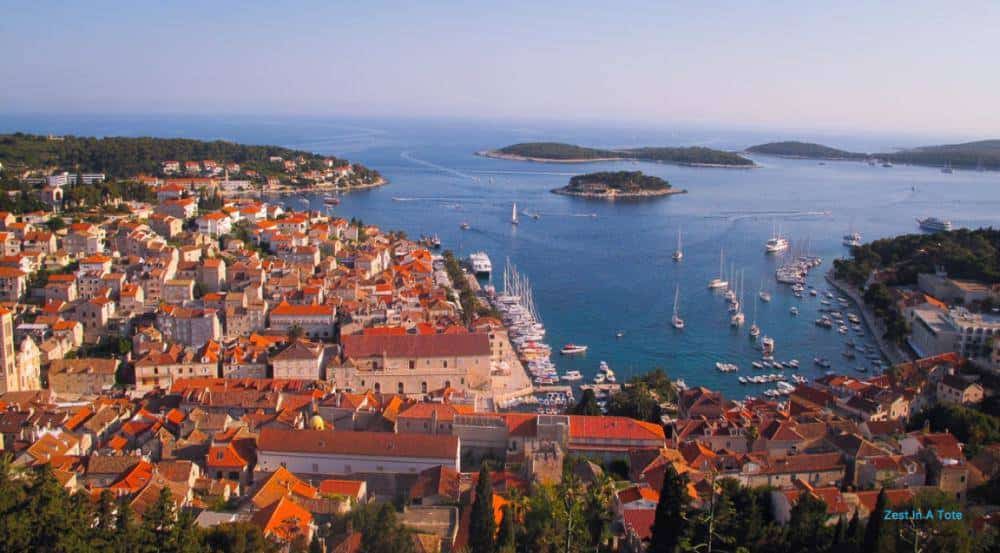 Not undiscovered but still a gem. “Croatia” – the name conjures something far away and exotic.

My first trip to Eastern Europe. A visit to Diocletian palace and King’s landing!

The immigration officer at the Delhi international airport, however, shrugged when we told him our final port of destination, and added, “But why is everyone going to Croatia these days?”

Umm, perhaps not that exotic!

Mediterranean climate, 2000 kilometers of coastline, an array of beautiful islands, stunning medieval towns of Split (check out our guide to Split) and Dubrovnik, the picturesque Plitvice National Park, a chance to jump across the border for a dash to Slovenia. What’s not to like!

The country met my high expectations and then some. It is a small country (I am from India, so it felt small, in comparison). Yet, we had to skip the Istrian peninsula during our two-week holiday. There is so much to see and experience. The warmth and genuine hospitality of Croatians make it decidedly suitable and enjoyable for families. We faced no issues in communication. Most people in the bigger cities speak passable English.

1. 2000 km of coastline and an array of beautiful islands

Croatia offers a stunning array of islands, each with its unique attractions. It becomes quite difficult to choose which islands to go to. The good news is that whichever one you choose would not disappoint you. Hvar, Brac, Korcula, Mljet, Rab are popular islands to explore.

We chose Hvar and Vis as part of our 2-week family holiday in the summer.

Hvar island enjoys a large number of hours of sunshine (more than 2500 hours per year), which gives it its nickname of Sunny Hvar. Its relaxed Mediterranean lifestyle, cultural heritage, delicious local cuisine and fine wines all make it a winner for a vacation of a lifetime.

And despite its reputation as a party town, I found that it offers a lot more. Rent a car in Hvar town to explore the island, look at old olive tree plantations and lavender fields. Stroll through small towns of Jelsa and Vrboska. Go into Hvar town for a sundowner.

Hvar does have some good beaches around the island – Dubovica, Lucisca, Saint Nedilja and Jerolim being the more famous ones. For the culturally inclined, a visit to the Fortica is a must. Even if you are uninterested in its history, the views looking down over Hvar and Pakleni islands are stunning.

Home to about 3000 people, Vis is amongst the furthest inhabited islands and is not on the direct ferry route from either Split or Dubrovnik. That said, it has an interesting history. From 1950 until 1989, it served as the Yugoslav National Army’s base, out of bounds to foreign visitors. It still has the air of an unspoiled paradise.

Take the Military Tour in Vis – an experience unique to this island. Imagine going into a nuclear bunker! We visited a bunker dug 920 feet deep into a mountain, to protect Tito and the country’s ruling class from nuclear attacks. Other stops in this 4-hour tour included a submarine dock, cut deep into a mountainside, a house once occupied by Marshall Tito, Mount Hum for the best views on the island.

2. The stunning medieval towns of Split and Dubrovnik

Games of Thrones has been filmed all over the world, and in several other places in Croatia, but the outer walls of Dubrovnik look as if they were built for this TV series. With many GoT locations, a visit could leave you underwhelmed, yet the spots in Dubrovnik and the old town walls itself are very recognizable.

My top experiences in Dubrovnik included walking the walls in the old town, the sunset kayaking tour, a visit to the Franciscan monastery, taking a cable car and going up the Srd hill and soaking in the atmosphere in the lively bars and cafes of Dubrovnik. I would recommend staying in the old town itself.

We loved our brief stay in the old town of Split as well. It is quite an experience to live in the Diocletian Palace. This is a living city, its narrow streets, packed with people, cafes, restaurants, bars and boutique stores. Built as a military fortress, imperial residence and fortified town, the palace measures 215m from north to south and 180m east to west, altogether covering 38,700 sq meters. There are 220 buildings within the palace boundaries, home to about 3000 people.

There is a remarkable ancient Roman courtyard, in the heart of the Diocletian Palace. Sitting on the steps in the Peristil, sipping a lemon beer or a glass of wine and enjoying the summer buzz would be my top experience in the old town of Split.

Considered one of the most beautiful natural sights in Europe, Plitvice Lakes National Park plays host to more than 1 million visitors each year. Most people visit the park as a day trip from Zagreb or Split.

It is famous for its lakes arranged in cascades, that are all interconnected and follow the water flow. The lakes are renowned for their distinctive colors, ranging from azure to green, grey or blue. 18km of wooden footbridges and pathways snake around the lakes’ edges and across the rumbling water.

There are 8 different hiking routes – A, B, C, K1, E, F, H, K2 – that cover the entire park. Your route choice would depend on the distance you want to cover, easy vs moderate hiking options, whether you want to be closer to the lakes/waterfalls, your desire to be away from the crowds.

We didn’t try the traditional Croatian cuisine; it is too meat heavy for our tastes. But with a great deal of time spent in sea-side cities and islands, we did have a lot of fresh, grilled seafood.

Italian cuisine is quite pervasive in Croatia, and that hardly comes as a surprise, given that Croatia and Italy are separated only by the Adriatic Sea. This was helpful with feeding our 6-year old when she got bored of grilled fish.

We had a lot of wine, and I mean, a LOT. Mostly crisp whites. And also the delightful lemon beer.

Croatia is a great destination for an active holiday. There are several fun activities like cycling, kayaking, diving and hiking to do.

With its long coastline and clear water, kayaking is a must-do in Croatia. And there are hordes of companies that can organize the kayaking experience for you, from most cities (Zadar, Split, Dubrovnik) and most large islands (Hvar, Vis, Brac, Korcula etc). Our sunset kayaking experience in Dubrovnik – a great way to feel up, close and personal with the Adriatic Sea, see the old town walls from outside, see some of the spots around the old town including the Lokrum island – was one of our best experiences.

With its dramatic landscapes and quiet back roads, Croatia is a lovely cycling destination. My husband had a fun time cycling solo in Hvar and Vis.

The Adriatic sea has really clear water, but don’t go expecting the variety of marine life that you get to see in the tropics. There are several diving centers, both in the coastal cities and the big islands.

Hope you are planning your trip to Croatia now!

A Week in Barcelona | 7 Day Itinerary

Places To Visit Near The Shard In London