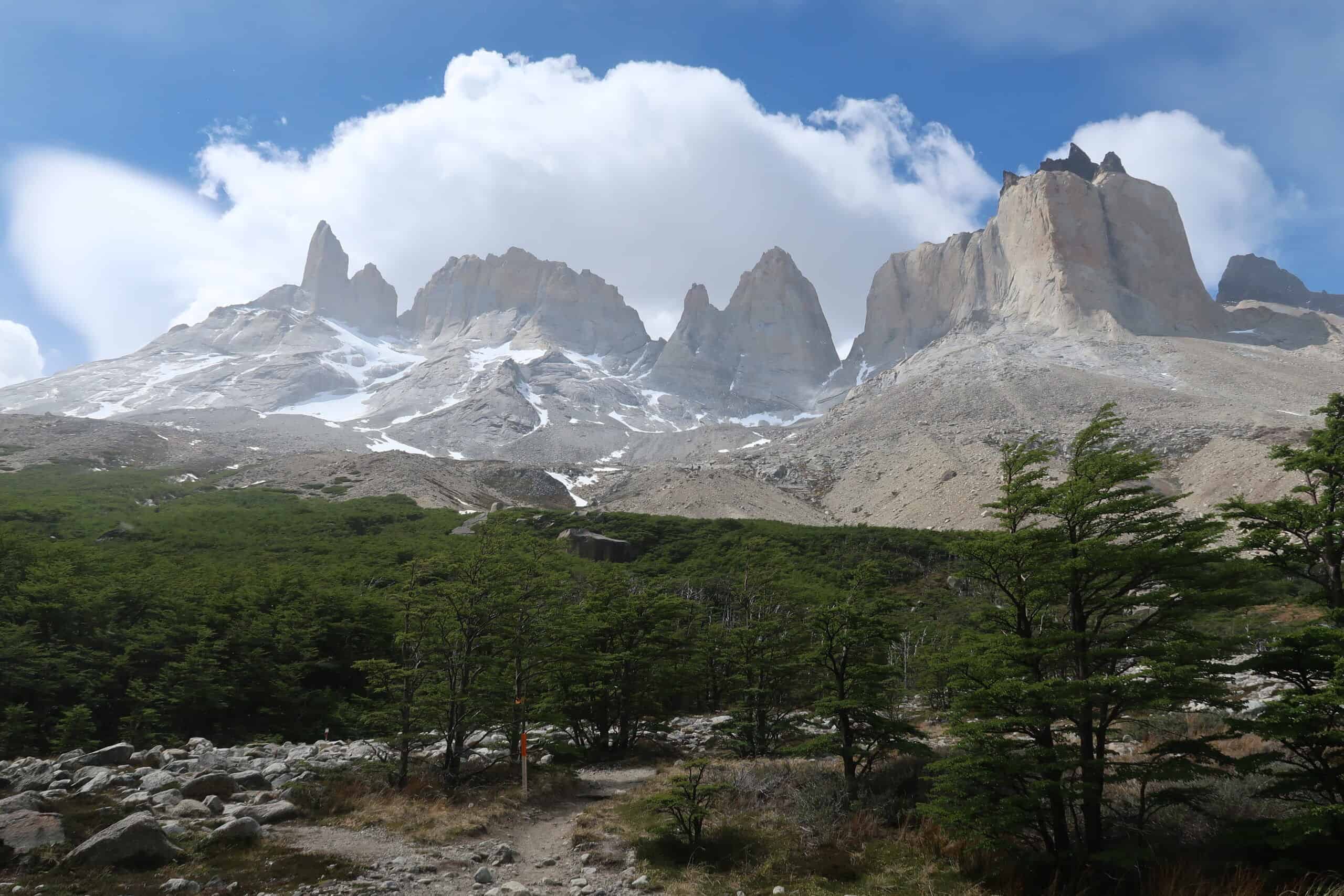 Stretching 4,270 km (2,653 mi) from the desert around Arica to one of the southernmost points in South America, Chile encompasses a vast range of climates, landscapes and ecosystems.

With the Pacific on one side and the Andes on the other, you’ll find here a wealth of photogenic and beautiful places in Chile, as well as many pretty cities and towns from Northern Chile to Southern Chile.

If you’re looking for some inspiration on where to go in Chile, keep reading!

Here are 12 of the most beautiful places in Chile

There are many beautiful places in Chile to visit, covering a vast number of different types of landscapes and experiences.

The driest non-polar desert in the world, the Atacama desert is full of interesting geological features. Stay in the town of San Pedro de Atacama and take a tour or bicycle ride to nearby sites such as The Valle de la Luna (Valley of the Moon); an appropriate name for such a weird landscape of multi-hued rocks and dusty salt flats.

Tours also run from the town to El Tatio Geysers (like this one), which are particularly remarkable at dawn when the vast plumes of hot water catch the early morning light. If you’re willing to brave the cold air you can also take a dip in the springs. On the edge of the desert, near the city of La Serena, you can take tours of observatories and get a glimpse of extraterrestrial beauty.

This little-visited valley has been compared to Yosemite National Park, and hiking into the valley it’s easy to see why. Huge granite mountains loom high above, with vast waterfalls streaming down into forested valleys.

Those who come here are in for an adventure, with the main tourism centre (La Junta) comprising of just a few accommodation options, one of which is only accessible via a platform connected to a pulley system across a swift river. The hike here alone is over 8 miles away from the nearest car park, but it’s a wonderful hike which slowly reveals the majesty of this valley.

You may even pass a man and his horses bringing supplies to La Junta. Hiking is the star attraction here, with trails leading up into this granite peaks. Although challenging – with few signs and at times precipitous paths – the routes all lead to stupendous viewpoints.

Your first impression of Valparaíso may not make you think it’s particularly beautiful, but once you’re closer to the centre of the city you’ll realise that it has its own particular style. The Historic Quarter is replete with colourful buildings and is a UNESCO World Heritage Site. Here there are grand, ornate edifices, delightful little squares, and 140 year-old elevators and funiculars carrying passengers up to pretty cobbled streets. This historic beauty is matched by the beauty of the city’s famous street art, which livens dull walls with fantastical scenes and figures.

If you’re staying in Santiago, you’ll find many day tours to Valparaíso.

Mystical Chiloé is a 3.5 hour bus journey from Puerto Montt if you go straight to the capital Castro, or around 2 hours if you stop in Ancud first. From Ancud you can undertake a tour to the wild coast to see penguin colonies as well as beautiful Pumillahue bay. Castro is famous for its colourful wooden buildings constructed on stilts over the sea, and it also has a bus that runs a couple of times a day to the Dock of Souls – a wooden platform above huge cliffs which makes it appear as though you’re walking off into the ocean. The name comes from a legend of the Mapuche, who are an important part of Chile and whose culture and traditions add to the rich experiences on Chiloé Island.

The Chilean Lake District is a vast area in the south of Chile and features dozens of lakes dotted along the foothills of the Andes. This is, perhaps, the most beautiful part of this South American country and a must-see on any Southern Chile itinerary. The towns here often have equally gorgeous architecture and in Pucon you’ll find neat streets with many buildings influenced by German settlers. It has a beach on the sublime Lago Villarica, and behind are the snowy slopes of the fairly active Villarica volcano itself.

Buses run frequently to Huerquehue National Park which has easy-to-follow mountain trails and breathtaking vistas. You can also take a bus to Reserva Nacional Villarrica which also has excellent trails up through monkey puzzle trees to yet more stunning viewpoints.

Also in the Lake District is Lake Llanquihue – Chile’s second largest inland body of water. On the shores of this lake is perched pretty Puerto Varas. Known as “The city of roses”, Puerto Varas has numerous buildings reflecting its German settler heritage, as well as a view of Osorno volcano – a view so perfect that you’ll find yourself stopping and staring at it from the town’s sublime waterfront. Take a bus or tour to picturesque Petrohué Falls where you’ll find raging water, calm lakes, and yes, more volcanoes.

Gorgeous Zapallar is a town just north of Valparaiso which attracts Chile’s rich and famous. It’s laid out beside a rocky cove and sandy beaches, over which mansions look out towards the Pacific. Take a stroll along the coast and spot endangered Peruvian pelicans. Keep going and you’ll get to Isla Los Pinguinos, where you can watch Humboldt Penguins frolicking in the sea.

Best explored by foot along the famous W trek, Torres Del Paine National Park is a wonderland of mountains, lakes, and forests. The mountains here are particularly spiky (hence ‘Torres’, or ‘Towers’), none more so than Torres d’Agostini, Torres Central and Torres Monzino which point finger-like up to 2,500 metres into the Chilean sky. Visitors will also get a peak at the Southern Patagonian Ice Field – the world’s second largest ice field outside of the poles – where it forms into the Dickson, Grey and Tyndall glaciers. You’ll probably see guanacos close to the entrance of the park. If you’re really lucky you may even see a puma.

Take the Navimag ferry from Puerto Natales to Puerto Montt and you’ll be undertaking a 4-night journey through some of the most incredible scenery on Earth. Countless mountains and volcanoes appear along the route as you glide by, with hardly any signs of human habitation. In fact, the only stop along the way is at Puerto Eden, a village of under 200 people that can only be accessed via the ferry.

Far more common than humans is the plethora of birdlife, among which you may see albatross and petrels. Beneath the water it’s not uncommon to spot dolphins and whales. Roughly halfway among is the Messier Channel where you’ll see the partially submerged wreck of the Capitán Leonidas ship. There are also points at which you may see that distant Southern Patagonian Ice Field, but perhaps the most thrilling part of the journey is when the ship has to navigate particularly narrow channels where it feels as though you could reach and almost touch land.

The arid Maipo canyon is a short drive from the capital, Santiago, and gifts visitors with awesome views of the Andes. Dotted along the canyon are patches of green where irrigation feeds green lawns and walnut tree groves. Embark on a horseback ride through forests, rivers and vineyards. If you’re feeling fit then trek up to El Morado lookout for some truly spectacular mountain scenery.

This southern tip of South America is shared with Argentina, and the next land mass you’ll come to if you continue south is Antarctica. Although not quite as cold as the White Continent, Tierra Del Fuego is still a land of cool summers and freezing winters. The rocky landscape is pounded by weather brought in by the Atlantic, Pacific, and Beagle Channel and astounds visitors with its wild beauty. But the starkness belies the wildlife which can be found here, not least the huge King Penguins (join a tour to go see them). Porvenir is a fascinating little town with stark scenery that was once the home of the Selk’Nam people, who sadly were the victims of colonialist genocide.

The winelands of Santa Cruz are the perfect contrast to icy Tierra Del Fuego, and yet another illustration of the contrasting beauty of Chile. Rolling grasslands, Andean foothills and vast vineyards fill the landscape, and it’s those vineyards which pull in most visitors. Quite rightly, too, as here is produced some of the best wine in the world, which you can enjoy in sumptuous splendour at wineries such as Clos Apalta Lapostolle, where you can look out from its huge windows over the very grapes that become the delicious drink you will undoubtedly be sampling.

While this list covers a lot, there are still many incredibly beautiful places in Chile! A few others include Patagonia, Easter Island and Volcan Villarrica.

Practical Tips for Driving in Brazil

How to Get to Providencia Island in Colombia

Top Things to Do in Rio de Janeiro, Brazil

Trending Destinations: Under the Radar Places to Travel to