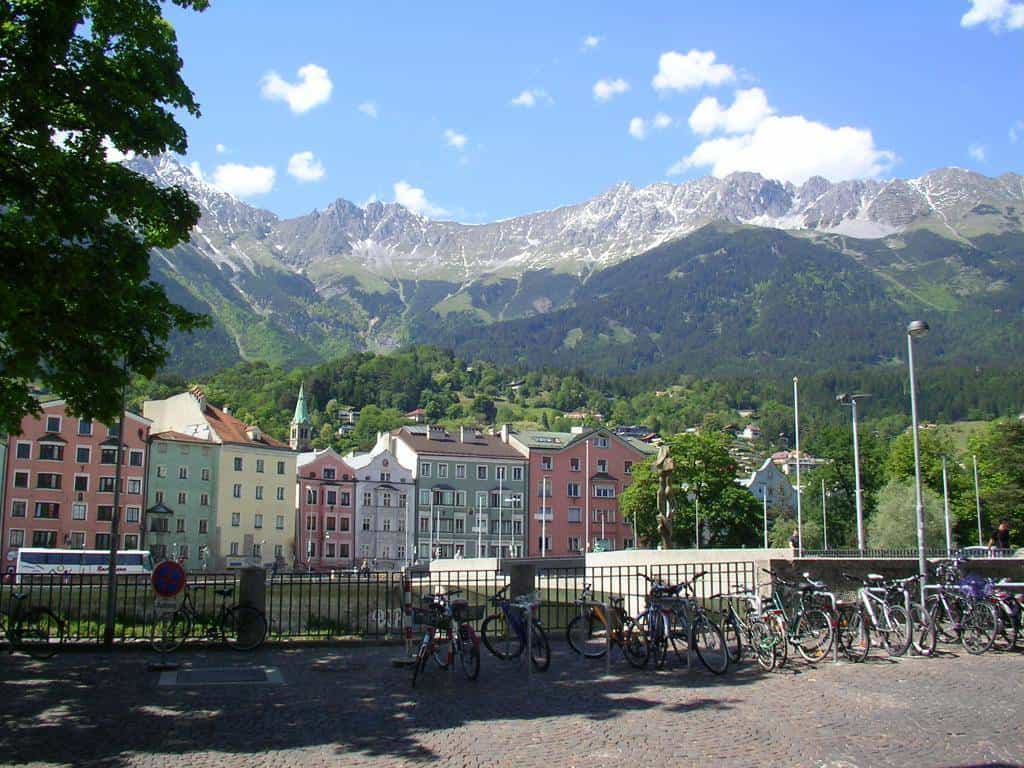 Innsbruck, one of Austria‘s oldest cities, is probably every woman’s dream of old age; the only thing that gives away its 900 years is its charm.

Right out of the train station, I’m awed by the towering presence of the Alps. People are going about their daily affairs – eating, strolling, chatting, catching a bus, cycling – as though the Alps are invisible, as though they’ve discovered how to look away from the gripping beauty of their snow covered peaks, as though there’s nothing extraordinary about living in a city surrounded by one of the most endearing mountain ranges in the world.

My eyes fixated on the big brother in the backdrop, I just about survive crossing the busy roads to my Gasthof (the German term for anything homely, in this case, my guest house). The owner tells me that the family-run Gasthof is half the age of the city, four hundred and ninety-five to be precise, and seeing me surprised, he assures me that it won’t collapse!

I step out of the little lane hiding the Gasthof and find myself as mesmerized by the Alps as when I first entered the city. I never get used to their omnipresence in Innsbruck up until the hour I leave.

I make my way to Innsbruck’s cobbled old town, and I’m yet to see anything more chic in Europe. Its quaint cafes and bars are the heartbeat of the city, quietly tucked away in the narrow lanes behind the Innsbruck river. Their ambiance is always at war with the harshness of the tongue spoken by the regulars, the way it sounds to a native English speaker like me. And the contradictions just begin here. I keep trying to fathom how life can move at the pace of a city with such a scenic backdrop. So untouched and so developed. So natural and so manmade. So isolated and so inhabited.

Something about Austria reminds me of Singapore. Its progressive stance when compared to its neighbours. Political references that are made only in hushed undertones. Borrowed language, food & culture, and a lack of something distinctively Austrian. Maybe the last one is because I haven’t an artistic head to venture out the old town into the artsy alleys to discover Mozart. But all I need to do is tilt my head upward to break away from these thoughts.

No comparison could do justice to the natural aura of this city, despite its complex history.

How to Use an eSIM for USA Travel