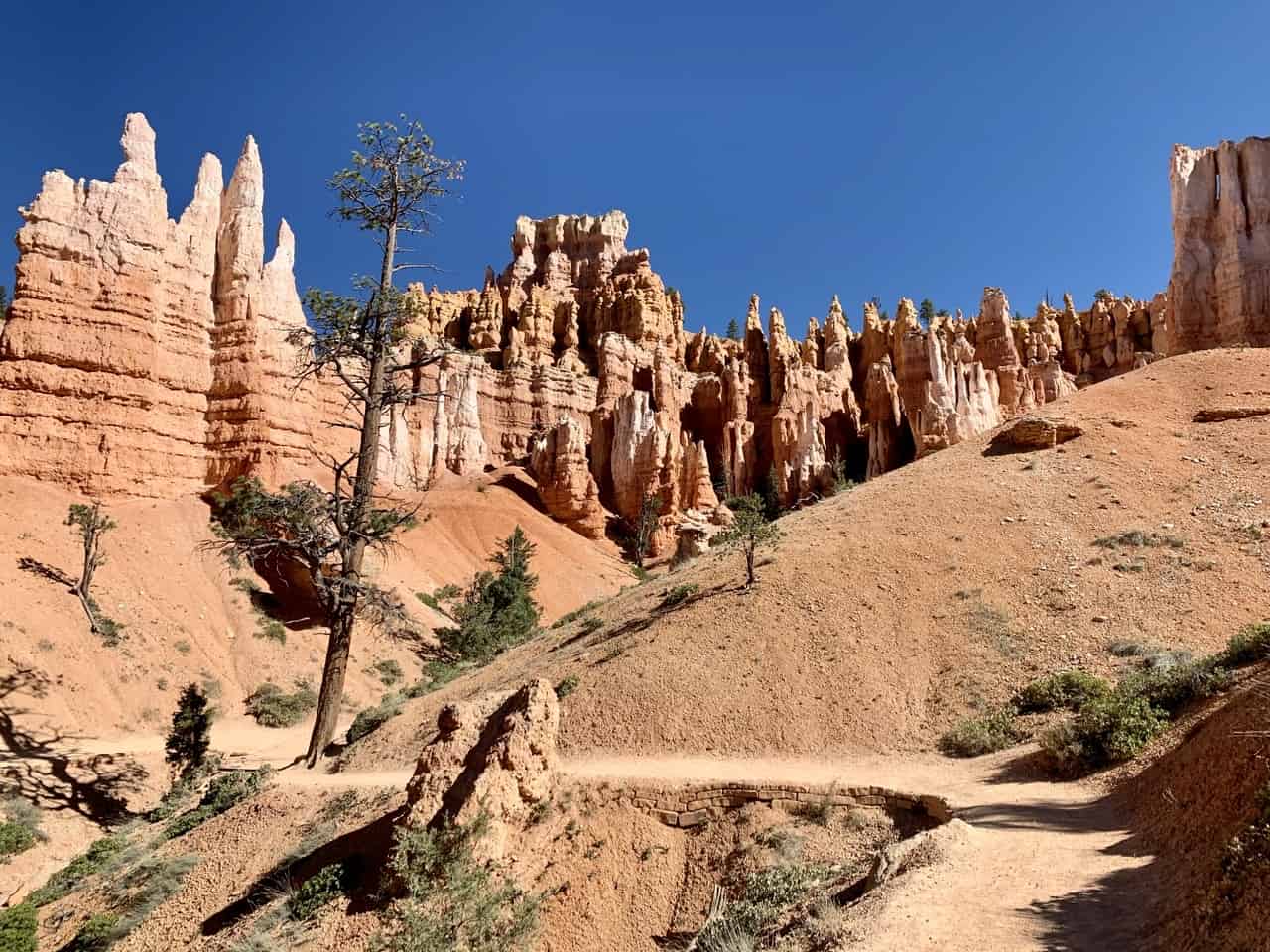 Utah is home to five great National Parks – often referred to as Utah’s Mighty 5. They are among the most visited National Parks in the United States. Each is defined by its own unique and spectacular geographic beauty. And each offers a number of hiking opportunities.

Here’s a look at some of the great places to go hiking in Utah’s National Parks.

Utah’s Mighty 5 National Parks stretch across the southern half of this western state. They include Zion, Bryce Canyon, Capitol Reef, Canyonlands, and Arches.

Many travelers to Utah will visit all 5 Parks as part of a southern Utah Road trip. They are separated by a total distance of 353 miles, stretching from Zion National Park in southwest Utah to Arches National Park in southeast Utah. I would recommend a minimum of 10 days for road tripping all Five.

The most common gateway cities for reaching these Utah National Parks are Las Vegas and Salt Lake City. Zion is approximately 2.5 hours by car from Las Vegas, and 4 hours from Salt Lake.

As with most popular sites, summertime visits will be very crowded. Spring and Fall will offer fewer crowds and cooler temperatures. The Parks are open year round, but winter temperatures will be cold in all Five, and snow should be expected in several of them.

Each one of these great Parks offer multiple hiking opportunities. You’ll find trails to arches, trails through hoodoos, trails along riverbeds next to soaring canyon walls, trails along 2000 foot high ledges with breathtaking views, and trails exploring some of the most unique geography in the United States.

Here’s a quick look at Utah’s National Parks and my favorite hiking trail in each.

See also: Gear Guide: Must Haves for Camping and Hiking

Zion National Park is the most popular of Utah’s Mighty 5 and rated #1 in the entire US by AllTrails.com. It’s known for its majestic sandstone peaks, 4 different scenic drives, and its two world famous hikes – The Narrows and Angels Landing.

The Narrows is a hike through a shallow flowing river as it cuts between narrow soaring sandstone walls. Angels Landing is a hike along a narrow 1500 foot sandstone ridge offering some of the most spectacular views across Zion Canyon.

Since the Narrows and Angels Landing aren’t for everyone, and since I’ve personally not hiked either, let’s take a look at the Canyon Overlook Trail – a much easier hike with a huge payoff at the end.

The Canyon Overlook Trail is only 1 mile (1,6km) round trip and is one of the easiest hikes in the Park. It only gains 160 feet in elevation across its length.

This popular trail starts with a series of switchbacks up along the side of a sandstone cliff, before inclining gradually along Zion Canyon’s eastern plateau – towards its edge and the “Overlook”.

While hiking this trail, you’ll walk along several ledges (protected by railing), while admiring the scenery several hundred feet below. You’ll walk through a long recess – carved into the sandstone cliffside – while admiring the nearby sandstone peaks on the opposite side. And ultimately you’ll scramble to the top of Zion Canyon’s tall eastern wall.

Here, you’ll be greeted with this view….canyon floor a couple thousand feet below….massive sandstone canyon walls stretching out across to Zion’s western peaks in the distance….Breathtaking!

Utah’s second most visited National Park, Bryce Canyon features unique sandstone hoodoos eroded over the millennia along the side of a high mountain plateau. I consider the Bryce Canyon Amphitheater – the area of the park with the highest density of hoodoos – to be Utah’s most spectacular site.

Hiking down through these hoodoos and along the Bryce Amphitheater Rim is an experience not to be missed by visitors to Utah’s National Parks.

My favorite hike in Bryce Canyon is the Queens/Navajo Loop Combination Trail. This route combines several of the best trails in the Bryce Canyon Amphitheater, creating a 3.1 mile (4.9km) loop. It’s a great way to see all of Bryce’s best features in one single hike.

It starts at Bryce’s most photographed viewpoint – Sunset Point. It then descends steeply into the Amphitheater along a series of terraced switchbacks, directly into a short hoodoo-lined slot canyon called Wall Street.

Here, at the base of the Amphitheater, the trail works its way over to Queens Garden – a collection of hoodoos that includes one resembling a seated Queen Victoria.

The trail then meanders up the side of the Ampitheater, in between one unusual rock formation after another, back to the top. An elevation gain of 650 feet.

Once back on top, the trail then follows the Amphitheater Rim back to its start at Sunset Point. This give you the perfect chance to take in the amazing view out across Bryce Canyon all along the way.

Capitol Reef, located centrally between the 5 Parks, features Utah’s Waterpocket Fold. This long stretch of the earth’s surface wrinkled up when certain tectonic plates collided millions of year ago. One side raised higher than the other. Over time water eroded the earth’s surface revealing and reshaping the Wrinkle.

The Park is named for the large white sandstone domes along the Waterpocket Fold that resemble the dome of the U.S. Capitol Building.

This great hike takes you straight through a section of Capitol Reef’s Waterpocket Fold, from one side to the other, along an ancient dried-up ancient river bed…a river that once cut your hiking path through the sandstone.

The Grand Wash Trail is a flat 4.4 mile (7km) round trip hike through soaring 500 foot canyon walls that alternate colors all along the route. Sometimes white, sometimes brown, sometimes red. These high canyon walls are absolutely stunning – their height, their colors, their closeness.

And speaking of close, there is a section through the Wash called The Narrows. Here, the walls stand only 20 feet apart.

Walking along this trail, with the walls closing gradually together, is an experience not to be missed while hiking in Utah’s National Parks.

The park also features lots of other unique sandstone formation too. These include Balanced Rock – a giant sandstone boulder tipping precariously on a sandstone pedestal, and the Fiery Furnace – a large collection of tightly packed sandstone canyons.

Delicate Arch is Utah’s most iconic site and a frequently used symbol for the State of Utah. And the trail to Delicate Arch is one of the most popular hiking trails in all of Utah’s National Parks. The hike itself is 3 miles (4.8km) round trip, moderately difficult at times, frequently crowded, and worth every effort.

And then, as you come to the end of this ledge, Delicate Arch suddenly appears to the right, sitting isolated on the edge of a natural stone amphitheater. Walking around that corner is one of the grandest moments to be had while hiking in Utah’s National Parks.

From here, you can cross the amphitheater to the Arch itself and stand underneath it. Or just take a seat and admire one of Utah’s greatest natural wonders.

Canyonlands National Park is also located in the Moab area. Its entrance is just 30 minutes away from Arches. Canyonlands is the largest of Utah’s Mighty 5 Parks and has three different sections. The most frequently-visited section, called Island In The Sky, sits on top a high plateau and offers stunning views out across deep canyons carved by the Green and Colorado Rivers located 2000 feet below.

The name of this trail is somewhat self-explanatory. The Island of the Sky section of Canyonlands is all about its views, and several trails can be found along its length. But the Grand View Point offers the grandest view of all.

This trail is located at the very southern end of the “Island’s” plateau. The road through this section of the park ends at the trail head. But the trail then continues following the edge of the plateau all the way to its very tip.

The hike is 1.8 miles (2.8km) round trip and is mostly flat. There isn’t any sort of railing or barrier and the drop off is dramatic. But the pathway is set back off the edge – manageable even for the height-phobic.

It’s also easy to find places at Grand View Point to just sit and take it all in.

As you can see, hiking in Utah’s National Parks is a truly awesome experience. You’ll find so much natural wonder in each of the Mighty 5. And these five hiking trails – along with the many others in each Park – are the very best way to appreciate all of the unique geography that Southern Utah has to offer.

Exotic Food in Rocky Point: Taking it to the Street

Things to see in Death Valley and Furnace Creek

Cuba Travel: How to Get Around Havana