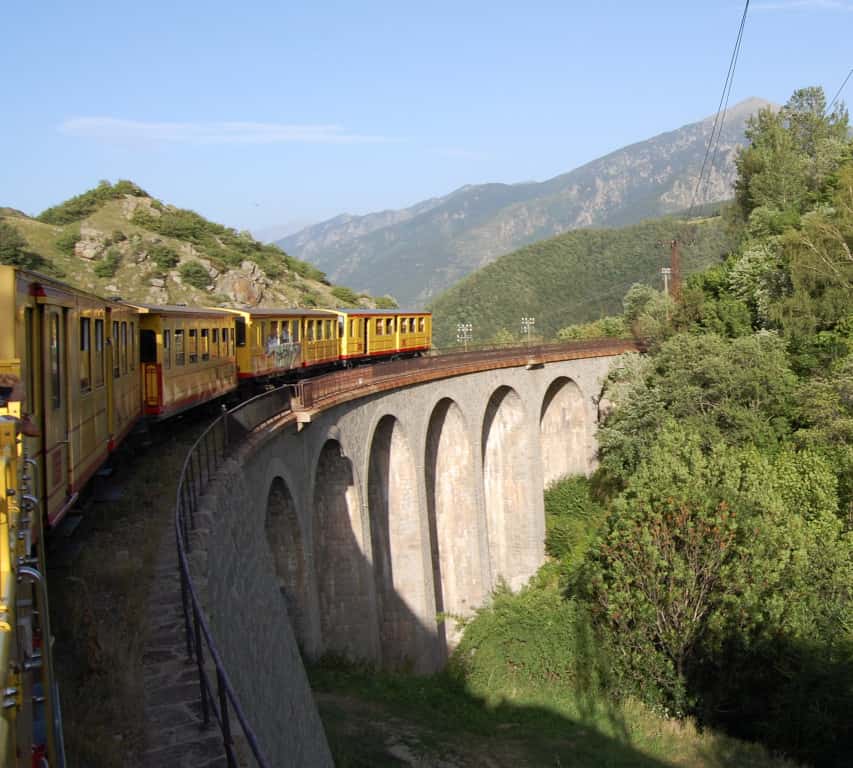 A glistening train, in the Catalan colours of yellow and red has meandered its way through the French Pyrenees near the Spanish border, connecting remote and isolated mountain villages for over a century.

This is what to expect with the French Pyrenees train (also known as Le Petit Train Jaune).

Le petit train jaune travels through stunning alpine scenery via small villages frozen in time over towering bridges and tunnels dug through the mountainside. It’s one of the beautiful trips in France to take.

The train departs from the UNESCO heritage-listed medieval village of Villefrance-de-Confluent. Fort Liberia overlooks the small town offering a stunning view of the boomerang-shaped Villefrance. The town boasts tiny stone houses, narrow streets and intact medieval defensive walls that protected Villefrance for centuries from the marauding Spanish. Protecting the population from the evil mountain spirits, The village has lots of witches and broomstick models dangling from doorways and shop windows.

While chilly at first, the train includes two open carriages called les bains (the baths) that gushes with fresh mountain air. It is the best way to witness the engineering marvel (built before World War 1) of cutting a line through this mountainous countryside. The track twists and turns between mountains, plunging into the inky darkness of a tunnel when no other paths are available. Several times throughout the journey, the train travels high via viaducts and bridges over the heavily wooded valley floor, including the vertigo-inducing Séjourné Viaduct with its dramatic double-decker arching.

Small stations whisk past, the train only stopping at more major locations unless signalled from a passenger to stop. Most travellers stay on the train for the entire return journey. The striking village of Olette features tall narrow houses that clung to the cliff edges with the confidence of mountain lions. Several of the villages appear unchanged in centuries, their grey stony houses having weathered numerous harsh winters.

Powered by an electric current along a third rail produced by a hydro plant from a nearby dam, the train can even claim green credentials. The power is required as the train steadily clambers up to Bolquère-Eyne, France’s highest rail station at almost 1600 metres.

Reassuringly, as the little yellow train crosses a mountain plateau and rolls down into the final stop at Latour-de-Carol, the train boasts three separate braking systems each capable of stopping the train alone. The train travels through lush verdant farmlands, dotted with caramel-coloured cows and large rolls of hay readying for the harsh mountain winters.

I’d recommend getting off at Bourg-Madam (the last stop of Latour-de-Carol is fairly uninteresting), three stops before the end, walk through scenic grassy surrounds for around half an hour (up hill) across the Spanish border to the quaint town of Puigcerdà, featuring an historic belltower. There is enough time to return and reboard the train on its return leg.

Available on rail passes as part of the French rail system, the Yellow Train offers an uplifting and relaxing day among superb mountain scenery and tiny medieval villages of yesteryear.

Things to Do in Rome: Our Rome Activity Guide

Things to do in Puerto de la Cruz in the Canary...

Things to do with Kids in Ireland in the West