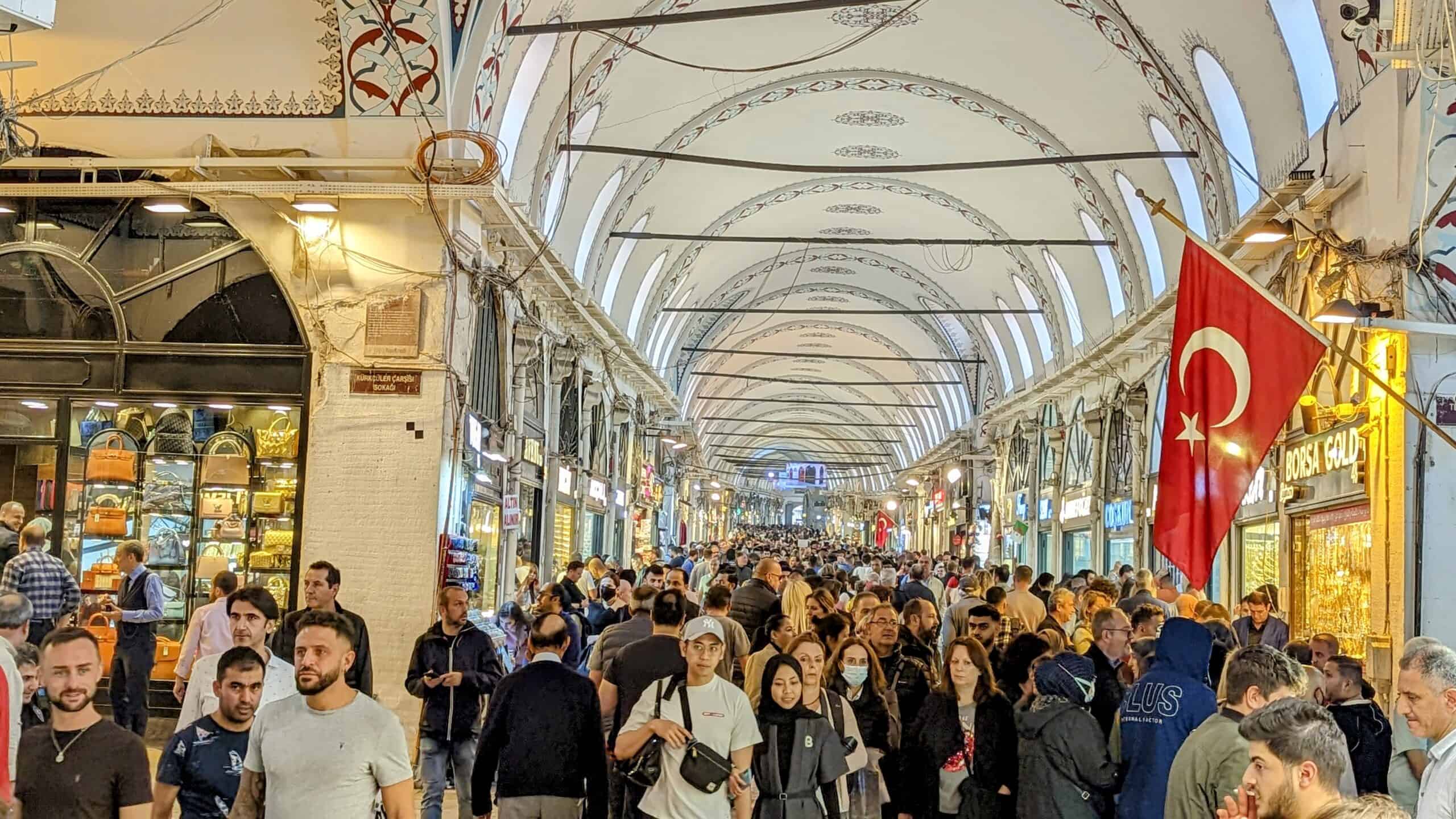 Best-known for its hundreds of shops flogging everything from spices to jewelry, the Grand Bazaar is one of the biggest and oldest covered markets in the world.

Located centrally in Istanbul, the market is one of Turkey’s most well-known landmarks. It has been around for centuries and continues to be a busy hub of activity, with stalls selling an array of wares including spices to jewelry. Grand Bazaar in Istanbul is safe and easy enough to navigate.

Good to know about Grand Bazaar in Istanbul

The Grand Bazaar is open every day from 8:30 in the morning to 7:00 in the evening. However, during religious holidays, the stores are closed.

How much time should you spend in the Grand Bazaar?

You need to spend at least 3 hours to visit the Grand Bazaar, including coffee and a lunch break. If you want to skip lunch, you can probably cover the market is about 1.5 hours – but we recommend tasting some of the local delicacies in the market.

Is there an entrance fee to the Grand Bazaar?

No, you do not pay an entrance fee when you visit the Grand Bazaar.

Where can you meet when you are lost?

Each gate also has a number. So I recommend choosing one of the major gates and remember its number, so if you should get lost, you could meet up there again.

What kind of things can you buy at the Grand Bazaar?

Of the more than 4,000 shops in this 546-year-old rabbit warren, a handful have anchored the luxury scene for years, occupying the secret rosters kept by fashion designers, buyers and locals. The trouble is finding them. No one goes by street addresses; just as the Istanbullus do, regular visitors feel their way through the labyrinth by landmarks, righting themselves at Kalpakçilar Caddesi, the long wide thoroughfare known as the gold street when they get lost.

And getting lost is probably the best way to explore this place.

Popular souvenirs are caftans. They are available in many different qualities in the bazaar, from elongated tunics (hirkas) that you might take to the beach, to the long robes that Grand Bazaar merchants offer when you ask for a caftan. These typically fasten down the front with buttons.

Haggling for goods at the Grand Bazaar

The dealers will speak to you in Spanish, English, Russian, German and many other languages. Depending on the appearance or treacherous conversation as you walk by. If you say “Merhaba” (Hello in Turkish), it’s bad news for the other person, because you’ve already lowered the prices before beginning to negotiate. 😉

Don’t be fooled by the tag prices. Remember that you can always bargain in the Grand Bazaar. If you are not satisfied with what is on offer, move on to other stores. There are very few stores that sell rare products. You will probably find the same or similar product in 10 other stores. A good tip is to take a picture of that store and its business card. If you ever want to come back, this is the only way you can find it. Do not rely on your memory.

Where to eat at the Grand Bazaar in Istanbul

At the Grand Bazaar in Instanbul, artisans work hard every day to create beautiful pieces of art. Similarly, restaurants in the area compete for customers by offering good food at reasonable prices. You can find some great places to eat if you know where to look!

The Nusr’et Steakhouse is one of the most popular places to go when visiting the Grand Bazaar. The establishment, owned by Nusret Gokce, offers a variety of delicious options including kebabs, shish, burgers and steak. If you’re looking for an amazing dining experience while exploring the bazaar, be sure to stop by Nusr’et Steakhouse!

This restaurant is hidden in a tiny alley, but really worth visiting if you want to eat like the locals. You will most probably sit and ‘dine’ between the shop dealers.

They cook a few dishes and you should come in time, because when all is sold, the chef won’t cook more for that day. The prices are low and the dishes are traditional and really yummy.

And for Oriental coffee and tea lovers:

Extra tip: Walk up the stairs next to it on the right and you’ll be able to get a glance from above of the Grand Bazaar.

Sights at or close to the Grand Bazaar in Istanbul

The Grand Bazaar has a long history, and in the past, it was also home to a number of inns that accommodated buyers and sellers from all over the world. There were 11 fully enclosed inns in total.

The so-called “hans” or “caravanserais” offer shelter to the caravans of traders traveling the mythical Silk Road. In addition to providing accommodation, they also stored the goods from the ships arriving at the Golden Horn.

Zincirli Han is the most famous and most photographed inn in the Grand Bazaar. If you’re visiting the Grand Bazaar, you can’t miss it, or at least you shouldn’t! It’s located on the second street to the right of Nuruosmaniye Gate, and it stands out with its red facade, dark green shutters and courtyard.

Today, the inn houses jewelry workshops. It’s believed that the inn was built at the end of the 18th century.

Büyük Yeni Han is a historic building located on Çakmaklar Yokuşu in Fatih, Istanbul. The inn was built in 1764 at the request of Mustafa III, and its architect was Mehmet Tahir Aga.

It has three floors, with 58 rooms on the ground and first floor, and 57 rooms on the second floor. There are also 40 shops located outside the inn. Inside, the courtyards are connected to each other by arched and barrel vaulted passages.

There is an inn called Cebeci Han in the north of the Grand Bazaar. The building probably dates back to the 18th century and has two floors with two courtyards.

At that time it served as accommodation for the merchants. After it was severely damaged in the earthquake of 1894, it remained in ruins for a long time until it was eventually repaired and put to use again.

The oldest and perhaps most impressive of Istanbul’s hans is the Büyük Valide Han. Built in the mid-17th century at the request of Sultan’s mother, this Ottoman building housed thousands of merchants over its lifetime. The Büyük Valide Han is a hidden gem in Istanbul. The grand han of Sultan’s mother is a historic inn from which you can see past, present, future and best views of Istanbul.

Büyük Valide Han is located in the center of Istanbul’s historic peninsula, specifically in Çakmakçılar Yokuşu between Grand Bazaar and Spice Bazaar. The best way to get there is by taking the streetcar to Eminönü and then finding your way through the connecting alleys from Spice Bazaar to Grand Bazar. If you have GPS, look for Çakmakçılar Yokuşu or use…

Although it may not be easy to find at first, part of the experience is finding your way through the busy bazaar streets. The building is named at the entrance, so when you find it, you’ll know you’re in the right place. Once you have located the Büyük Valide Han, enter through the large wooden door and walk through the first courtyard. To your left, you’ll see an abandoned building in a state of decay. Go up the stone stairs and you will be inside the old han.

The Han has two floors and three inner courtyards.

When you visit the Büyük Valide Han, please do so responsibly. This 300-year-old building is in a state of disrepair and is not a tourist site or listed in any guidebook. However, groups of tourists often visit and take pictures on the roof. Some of them jump on the domes, which endangers both the building and themselves. If you visit, please be cautious: stay away from the edges, watch your step and respect the place. Remember that you visit at your own risk. Or even better, miss out that part and explore the dark alleys.

How do I get to the Grand Bazaar?

The Grand Bazaar is conveniently located near tourist attractions and has multiple entrance gates. It’s easy to get there by public transportation; the cable car is the most convenient method. You can take the Kabataş-Bağcılar cable car line and get off at the Beyazıt stop.

Alternatively, city buses go directly to Beyazıt Square from many parts of the city.

If you’re looking for a more relaxed approach, you might prefer taking the ferry. It’s a great way to enjoy the scenery and not worry about time. There are direct ferries from Üsküdar and Kadıköy to Eminönü, and then you can just hop on the cable car heading to Bağcılar right in front of the ferry terminal.

Insider tip for visiting the Grand Bazaar in Istanbul

Reasons to do the Langtang Valley Trek