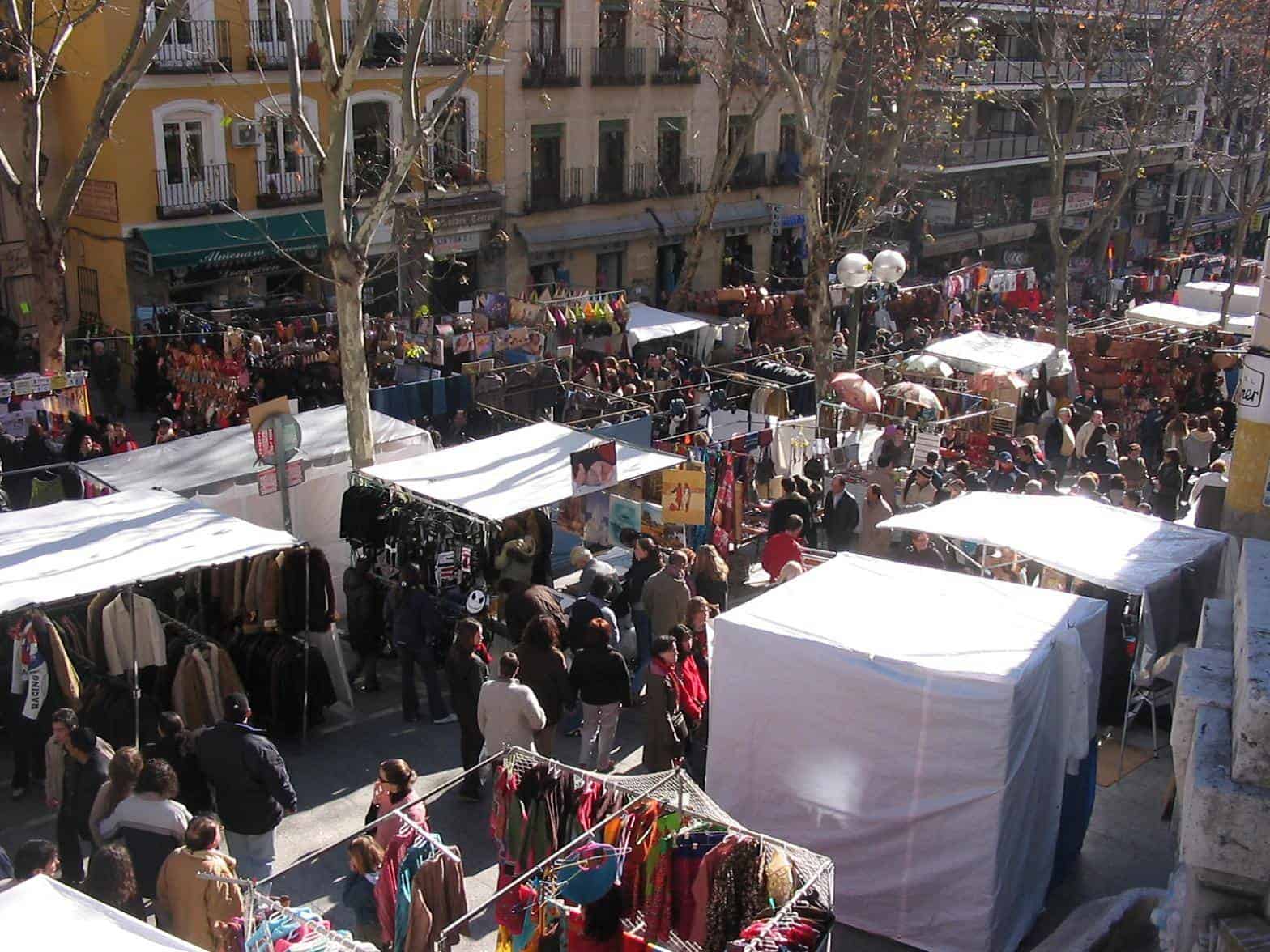 Born in the fifteenth century, El Rastro has been evolving and growing, while its existence has been regulated by the local government.

Today there is no travel guide about Madrid which doesn’t mention El Rastro, and its international reputation is comparable to other popular markets in several European cities like Waterlooplein in Amsterdam, the Portobello market in London or the Porta Portese in Rome. It’s most definitely the most popular Sunday flea market in Madrid.

So, if you spend a few days in the city, a visit to the El Rastro flea market in Madrid really is a must.

When & where is El Rastra held?

El Rastro takes place every Sunday and public holiday of the year, from 9 am to 3 pm, in the Embajadores neighbourhood.

A maximum of 3500 stalls cover the area from the Plaza de Cascorro, in the north, along the main thoroughfare of Ribera de Curtidores and adjoining streets to Calle Embajadores in the east and the Ronda de Toledo and Plaza del Campillo del Mundo Nuevo in the south.

Due to its size it can be reached from different metro stations: Line 3 (Embajadores, Lavapiés or Sol), Line 5 (La Latina, Puerta de Toledo or Acacias), Line 1 (Tirso de Molina or Sol) and Line 2 (Sol or Opera).

Why is El Rastra the most popular Sunday flea market in Madrid?

A different and heterogenic group of people meet here to have a look and find that bargain they can’t find anywhere else, it doesn’t matter if they’re hippie, punk, posh, old or young. In its stalls people can find a great variety of products, from second-hand clothing, antiques, crafts, books, records, furniture or even plugs. I think there’s nothing you can’t find at El Rastro.

In fact you will probably see things at this flea market in Madrid that you could have never imagined.

Certain streets or areas within El Rastro are associated, either by tradition or by the gathering of specialist stalls, with particular wares.

– Calle Fray Ceferino Gonzales is known as “calle de los Pájaros” (‘street of the birds’) as it was where pedlars and travelling sellers used to sell domestic animals and birds. Since the municipal regulation of 2000 animals can only be sold in stores.

– Calle Carnero and calle Carlos Arniches are where you will find stalls selling old, rare and collectible books.

Food at the El Rastro flea market in Madrid

But one day in El Rastro is not complete without a stop to have some tapas.

In many of the bars and taverns in the neighbouring streets to El Rastro is possible to taste some of the specialties of Madrid’s gastronomy, accompanied by a glass of wine or a beer.

There are also very popular bars where you can have cheap bocadillos (sandwiches) such as the squid one (a Madrid’s specialty), but also others such chorizo, Spanish omelette, cheese, etc.

After this exhausting and popular day in the city you better be staying in one of the apartments in Madrid near El Rastro, because you’ll probably be loaded down with shopping!

Visiting Madrid? Check out these posts:

Where to go Swimming in Barcelona and Surrounds

The Best Treks In The World