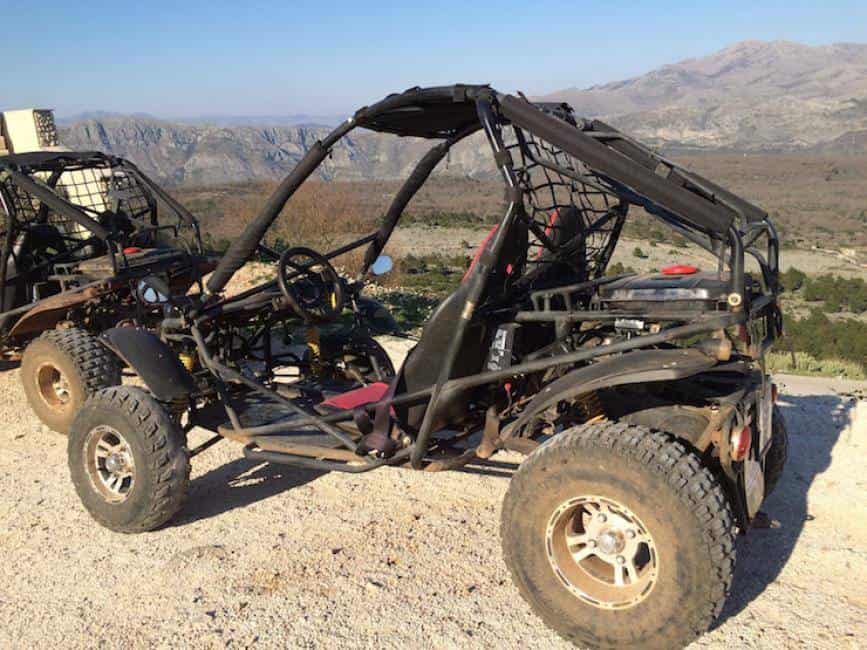 One of the most popular things for visitors to do in Dubrovnik, Croatia, is to take the cable car from just outside the city walls up to the top of Srd hill in order to look down on the ancient city from above.

The cable car takes you up to a height of 405 metres above sea level and the viewing areas at the upper station offer spectacular views of Dubrovnik and the local islands.

At the back of the upper cable car station you’ll find a collection of vehicles which look like they’re from the Mad Max films. These belong to Dubrovnik Off-Road Buggy Safaris and you can drive one if you have a driving licence.

My husband, our son and I tried out the buggies when we visited the city in April and it was a great experience. The buggies go on one-hour guided off-road safaris across the rugged countryside every hour. The tour stops off at an old fort and at a panoramic viewpoint en-route. Kids as young as five years-old can go along as passengers.

Before we set off I was nervous about driving as the terrain was very rocky and mountainous. Initially my husband drove a buggy with our son as a passenger while I was driven by one of the local guides, a lovely guy called Jure who spoke English very well.

We put on safety helmets and strapped on our four-point seat belts before we started driving. The drivers had a quick explanation of how to use the accelerator and brake – and then we set off.

The buggies have 150 cc engines with a top speed of 70 km/h. We drove at speeds of between 20-40 km/h but it felt a lot faster to me as we bounced along rocky tracks away from the cable car station and inland. I was glad that I was in the front buggy because the wheels were blowing up dust from the track as we went along.

We drove through the mountainous countryside until we stopped at a fort overlooking the sea. Jure told us that the fort had been built in the time of Napoleon and had been used in various wars since then, including during the 1990s Balkans conflict. There were rusting bomb parts lying around on the ground. Jure pointed out a nearby TV mast which, he said, was often fired at by the battle ship which patrolled the waters here during the Balkan conflict.

We whizzed along some more rocky tracks and through woodland until we stopped at a spot offering panoramic views of the sea and of the local islands. We took some photos and then got back in to the buggies for the final leg of the tour.

At this point Jure persuaded me to drive. I found it quite hard to reach the pedals (I’m 5’ 2” tall) and had to really stretch my foot in order to accelerate but I enjoyed driving the buggy much more than being a passenger. I found it easy to steer and to control the buggy and it felt much less bouncy as a driver – but after a few minutes I realised that it only felt more comfortable because I was driving very slowly!

I’d definitely recommend trying the Dubrovnik Off-Road Buggy Safari – it was fun and it was also educational as the local guides told us about the history of the area, and about what happened here during the Balkans conflict.

A Guide to Visiting Portsmouth

The World’s Most Famous Volcanoes